The Neo-Taliban, Counterinsurgency, & the American Endgame in Afghanistan 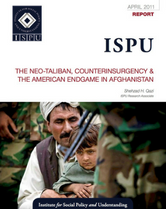 The Neo-Taliban, Counterinsurgency, & the American Endgame in Afghanistan

In November 2001, roughly a month after operation enduring freedom had commenced, the Bush administration declared victory in Afghanistan. By hiring Northern alliance militias to fight and using heavy bombardment and airstrikes, U.S-led forces had dismantled much of the Taliban’s control apparatus. Strapped for money, weapons, and support after many local Afghan commanders switched their allegiance to the U.S-backed militias, the Taliban could not compete and so, following a classic guerrilla technique, they gave up and dispersed, living to fight another day. Many cadres went back to their villages; others, along with some leaders, dispersed into the Hindu Kush mountain range and Pakistan’s tribal areas. Mullah Omar was last seen on a motorbike heading toward the mountains. Relatively soon, however, the Taliban began reorganizing and, by 2004, launched a full-scale insurgency in Afghanistan.

From 2003 to 2008 the United States largely ignored Afghanistan, comfortable with the notion that it was the “good war,” and focused on the insurgency in Iraq. As the “good war” went bad, American forces gradually became embroiled in violence, rampant corruption, and a flourishing heroin trade. Over ten years, approximately 11,000-14,000 afghan civilians have died as a direct result of the war, and coalition forces have lost over 2,300 soldiers. Now that this war has become deeply unpopular both at home and abroad, the United States and its allies remain stuck in a quagmire, seeking a way out. In December 2010 the Obama administration released a declassified summary of its strategy review for Afghanistan and Pakistan, stating: “[in] Afghanistan, the momentum achieved by the Taliban in recent years has been arrested in much of the country and reversed in some key areas, although these gains remain fragile and reversible.”

This paper addresses the United States’ endgame in Afghanistan within the context of the insurgency since it began in 2002. Most analyses focus obsessively on policy decisions being implemented by the United States and minor tactical successes. But the situation in Afghanistan requires that American policymakers and the public understand and examine the other side of the conflict. Who are we fighting? Where did we go wrong? How have the insurgents capitalized on those mistakes? This paper explains who the neo-Taliban are, as well as their political goals and organizational structure. it then describes how they reinvented themselves as a Pashtun and nationalist movement, benefitted from the allegiance of disaffected tribes, and consolidated power through horizontal networks. Subsequently, the U.S-led counterinsurgency is analyzed. The report details how politico-military failure, civilian abuse, and a delegitimized host government have marred the effort. Conclusively, the Karzai regime’s unpopularity, the rebels’ military gains, and the inability of the United States and the international security assistance force (ISAF) to defeat this rural insurgency all make the prospects of a neo-Taliban defeat dismal.