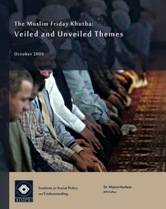 The Friday noon prayer is a special Muslim congregational prayer that includes a short address called the khutba. No strict requirements or specific prayers are necessary for this address, and so its content can vary widely. For an outsider, the khutba sometimes sounds like a civic address and at other times like religious moral advice that is thin on rituals except for few religious expressions in Arabic.

This participant observation paper analyzed two years' worth of khutbas delivered in Southern California, covering almost all Islamic centers in Los Angeles, Orange, Riverside, and San Bernardino counties. Data collection stretched from 2003 to 2006. To identify the locations of Islamic centers where khutbas are delivered, a list by CAIR complied was used as well as the online service of the Southern California Shura Council. Both Shi`i and Sunni mosques were covered. The San Diego area, which has approximately ten mosques, was not included in the study; nor was Santa Barbara, which has a single mosque. From the five remote mosques located between major cities, two were included (Palmdale and Temecula); those of Lancaster, Redland, Hemet, and Carlsbad were not. Also, khutbas delivered in university and college campuses were not included. This left fifty-five mosques from which khutbas where collected. As I failed to locate it, the small Muslim Chinese Mosque was the only one left out of the covered area. Although a special effort was made to trace new small and emerging mosques, there is the possibility that a few of them were missed. A total of 106 khutbas were analyzed.

The quest of this qualitative study was not to document the khutbas' themes, but to observe their proper contextualization. As with all texts, khutbas can be interpreted differently by an outside observer. But how can an outsider ascertain whether his/her understanding of the khutba really represents its actual discourse? Cognizant of this challenge, all efforts were made to suspend judgment and to follow the internal logic of the message. Following the established methods in qualitative research,1 the investigator immersed himself in the process to the point of saturation. Therefore, the paper represents neither a critique nor a celebration of khutbas; rather, it is a quest for understanding and proper contextualization. It should be noted that the study did not focus on well-known khatibs, those who present a sophisticated message and are widely admired. Instead, the study surveyed a wide range of khutbas looking for the general patterns found within an average one.