The Mosque and the State: After the Arab Spring 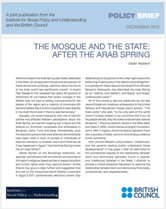 The Mosque and the State: After the Arab Spring

While the onset of the Arab Spring was widely celebrated in the West, as we approach the second anniversary of these democratic uprisings, optimism about the future of the Arab world has significantly waned. A recent Pew Research Poll revealed that nearly 60 percent of Americans do not believe that recent changes in the Middle East will lead to lasting improvements for the people of the region and a majority of Americans (54 percent) believe that it is more important to have stability in the Arab World even if there is less democracy.

Arguably, the recent popularity and rise of Islamist parties has affected Western perceptions about the Arab Spring, as have the ongoing war in Syria and the attacks on American consulates and embassies in Benghazi. Cairo, Tunis and Sana. Domestically, even the executive powers that were attained democratically have been used in favor of parties or individuals of Islamist orientation to broaden reach and influence, as it has happened in Egypt. Has the Arab Spring turned into an Arab Winter?

Daniel Byman of the Brookings Institute, for example, worries about the commitment and sincerity of the region’s religious-based parties to respect pluralism and human rights when they assume power. Amitai Etzioni has gone a step further and suggested that the rise of the ultraconservative Salafist movement in Egypt’s 2011 parliamentary elections (where they obtained about 25 percent of the vote) might require the jettisoning of democracy in the Islamic world altogether. It is perhaps for these reasons that Israeli Prime Minister Benjamin Netanyahu has described the Arab Spring as an “Islamic, anti-western, anti-liberal, anti-Israeli, undemocratic wave.

All of this recalls a famous statement by the late Jeane Kirkpatrick, American ambassador to the United Nations and Republican foreign policy advisor. “The Arab World,” she said, “is the only part of the world where I’ve been shaken in my conviction that if you let the people decide, they will make fundamentally rational decisions.” Previous election results in the West Bank and Gaza in 2006, where Hamas emerged triumphant, and in 1991 in Algeria, where the Islamic Salvation Front won a plurality of votes, come to mind lending credence to her comments.

How should Western policymakers, intellectuals, and the general reading public understand these developments? In this paper I offer an alternative to the conventional analysis of the relationship between Islam and democracy generally found in popular provide a critical analytical framework to examine the relationship between Islam and democracy historically, comparatively, and dispassionately.