The Meaning of Obama’s Speech in Cairo 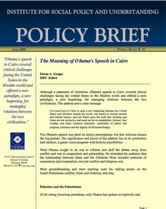 The Meaning of Obama’s Speech in Cairo

Although a statement of intentions, Obama’s speech in Cairo covered critical challenges facing the United States in the Muslim world and offered a new paradigm, a new beginning, for managing relations between the two civilizations. The address sent a clear message:

I’ve come here to Cairo to seek a new beginning between the United States and Muslims around the world, one based on mutual interest and mutual respect, and one based upon the truth that America and Islam are not exclusive, and need not be in competition. Instead, they overlap, and share common principles –principles of justice and progress; tolerance and the dignity of all human beings.

Yes Obama’s speech was short on policy prescriptions, but that criticism misses the big picture: The significance and power of his address lies in its symbolism and intellect, a grand vision pregnant with historic possibilities.

What Obama sought to do was to reframe and shift the debate away from conflict and war to cooperation and partnership. He reminded his audience that the relationship between Islam and the Christian West includes centuries of coexistence and cooperation, not just conflict and religious war.

Most groundbreaking and most startling were his talking points on the Israeli-Palestinian conflict, Islam and America, and Iraq.