The Legality of the U.S. Drone War in Pakistan 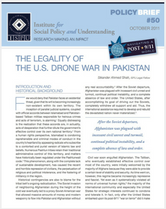 The Legality of the U.S. Drone War in Pakistan

Few would deny that Pakistan faces an existential threat, given that its writ is becoming increasingly non-existent within its own territory. The inception of parallel judicial systems, coupled with official accords between Islamabad and Pakistan based Taliban militias responsible for heinous crimes and acts of terrorism, is alarming. Equally distressing is the realization that these accords are, in actuality, acts of desperation that further dilute the government’s effective control over its own national territory. From a human rights perspective, Islamabad is condoning reprehensible and criminal modes of conduct in the country’s heartland by appeasing radicals who subscribe to a contorted and purist version of Islamic law and beliefs. Numerous Pashtun tribes retain their traditional administrative control of this territory, and matters have historically been regulated under the Pashtunwali code. This phenomenon, along with the complete lack of sustainable development, has caused the recent and horrible repression of civilians, the perpetuation of religious and political intolerance, and the fostering of militancy in the region.

Historical contingencies are also to blame for the tribal belt’s ongoing radicalization. The Soviet invasion of neighboring Afghanistan during the height of the cold war eventually led to a proxy Soviet-American war that allowed massive amounts of money and modern weaponry to flow into Pakistan and Afghanistan without any real accountability. After the Soviet departure, Afghanistan was plagued with incessant civil unrest and turmoil, continual political instability, and a complete absence of law and order. The United States, after accomplishing its goal of driving out the Soviets, completely withdrew all support and aid. Thus, the international assistance required to develop and rebuild the devastated nation never materialized.

Civil war soon engulfed Afghanistan. The Taliban, who eventually established effective control over most of the country, were initially welcomed by the majority of Afghans because they were able to provide a certain level of stability and security. As time went on, however, this regime became increasingly repressive and fascist. Yet even as it systematically violated all norms of universal human rights, the majority of the international community and especially the United States for strategic interests continued to condone and tolerate it. In fact, only after the United States embarked upon its post-9/11 “war on terror” did it make the following change: The averred heroic freedom fighting Mujahedeen, once credited with defeating the Soviet Union and triggering its disintegration, were formally reclassified by it and much of Europe as an integral component of the global terrorist network and the new enemy of the twenty-first century.

The advent of the “war on terror” ended the Taliban regime, but not the movement. As a consequence, Afghanistan returned to a state of anarchy and the authority of the American-instituted Afghan government remained limited primarily to Kabul. Moreover, the American and NATO forces’ failure to control the region has enabled thousands of Central Asian, Middle Eastern, and other radicals to see it as a religious battlefield. Washington asserts that many of these fighters routinely flee into Pakistan’s frontier region, where the local tribal communities give them safe haven, and that many local fighters from this same area cross the border to fight American forces in Afghanistan. Although not everyone accepts the veracity of such claims, the fight against terrorism has nevertheless spilled over into Pakistan. The outcome of this ideological battle between state and non-state actors has engendered more radicalization as well as civilian deaths and suffering. In addition, this ongoing reality threatens to fragment a nuclear-armed Pakistan that is already beset with serious problems: an economic meltdown, religious fanaticism, sectarian violence, and a secessionist movement. Not surprisingly, the implosion of Pakistan would represent a serious threat to international peace and security.

One must therefore analyze the significance and legality of the Obama administration’s ongoing drone attacks on Pakistan’s people in light of these circumstances. It is quite troubling to witness this consistent use of force against and violation of the territorial sovereignty of a nation that Washington itself officially proclaims to be an important ally in its fight against global terrorism. This is especially so when Islamabad has explicitly and repeatedly condemned such actions as violations of its territorial sovereignty and as seriously undermining its own struggle against homegrown terrorism.

A diversity of views, presented below, analyzes the reasons behind such unilateral acts of aggression against Pakistan by American forces stationed inside Afghanistan. Vocal critics of Washington’s foreign policy maintain at the risk of oversimplification that these attacks are consistent with its past policy and practice of routinely disregarding the norms of international law, one element of which is respecting the sovereignty of relatively weak nations. They also assert that Washington has systematically shown impatience in having grievances and disputes addressed through multilateral paradigms and processes that enjoy international support and are based on global consensus, while maintaining the requisite due process. In addition, it troubles them that the United States eschewed international institutional involvement after 9/11 because this time a UN sanctioning of the American position, as well as an international consensus on a suitable course of action, was forthcoming.

For critics, the United States’ status as a hyperpower has allowed it to consider itself as neither effectively constrained by nor subject to the rules of international law, even though it demands that other nations be bound by them. This approach undermines both the short- and long-term role and effectiveness of important multilateral systems. Critics maintain that American foreign policy is, broadly speaking, blindly driven by a dangerous interplay of self-interest and short-term objectives, a policy that encourages it to act paternalistically and intrude into another country’s domestic affairs at will. Such an “unholy” alliance eventually gives birth to mutual mistrust and may bring about either radical regime change or, perhaps, even a revolution. Allies frequently transform into foes or, at the very best, Washington becomes dissatisfied with a particular government’s performance and inability to deliver what it has promised. American transgressions of international law, in the form of reprisals, are often a result of such processes taking a turn for the worse and therefore a consequence of its own creation.

Conversely, many supporters of this foreign policy pursue an approach centered on addressing symptoms instead of determining root causes. For example, they condone Washington’s inappropriate use of force against perceived transgressors without factoring in the resulting adverse ramifications. For many of them, Washington is justified and must, at all costs, act as a bulwark against the scourge of international terrorism that threatens the continued existence of liberal values. Proponents of this view see the drone strikes as completely justified because, they maintain, Islamabad is unable to constrain the global terrorist threat emanating from within its borders. To an extent, these strikes substantiate the claim that the United States is hesitant to rely on other countries to fulfill those of its commitments that promote American objectives. A closer inspection of this issue, however, highlights a more convoluted state of affairs.

There is some truth to the assertion that the United States and Pakistan might be fighting two completely different wars. Following 9/11, Pakistan, under intense American pressure, had no real choice but to assure the United States of its unstinted support in the “war on terror” in Afghanistan. But when the Pakistan army was forced to fight against tribal militias within its own borders in the Federally Administered Tribal Areas (FATA) under Washington’s directives, it found itself engaging in an unpopular war against part of its own population. This course of action, which fomented indigenous insurgency and civil unrest, was overwhelmingly opposed by most segments of Pakistani society.

The overwhelming majority of Pakistanis do not perceive FATA’s indigenous tribal communities as being complicit in 9/11 and as involved in international terrorism per se. Most Pakistanis see the ongoing American drone attacks as futile acts of reprisals in response to 9/11 and as a policy that only increases the threat of global terrorism. To make matters worse, Islamabad’s inability to stop these attacks bolsters the extremists’ morale, for the whole country can see that the government cannot move against them effectively. This fact encourages them to become even more belligerent.

International terrorism, whether in the form of state or non-state action, clearly poses a threat to international peace and security. Yet it also must be realized that global terrorism presents a highly convoluted situation and that its resolution, however possible, is even more so. To work toward this, it is essential to understand the role of international law governing the use of force.