The Human Right to Water: Its Provision and Violation in Pakistan 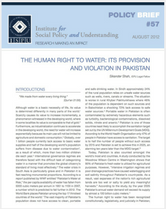 The Human Right to Water: Its Provision and Violation in Pakistan

Although water is a basic necessity of life, its value is determined differently in many parts of the world. Scarcity causes its value to increase incrementally, a phenomenon witnessed in the developing world, where in some localities its value is comparable to that of gold. Furthermore, as industrialization continues to accelerate in the developing world, the need for water will increase exponentially because its main use will not be limited to agriculture and domestic consumption. Globally, over 1 billion people currently lack access to basic water supplies and half of the developing world’s population suffers from disease due to water contamination, as a result of which, more than two million children die each year. International governance regimes are therefore faced with the difficult task of categorizing water in a manner that promotes the global citizenry’s standard of living most effectively.

The water crisis in South Asia is particularly grave and in Pakistan it is fast reaching monumental proportions. According to a report published by WWF entitled “Pakistan’s Water at Risk,” the per capita availability of water has fallen from 5000 cubic meters per annum in 1951 to 1100 in 2007, a number which is predicted to fall further in 2012. The World Bank places Pakistan among the top 17 thirstiest countries of the world. The vast majority of Pakistan’s population does not have access to clean, portable and safe drinking water. In Sindh approximately 24% of the rural population relies on unsafe water sources such as wells, rivers, canals or streams. The situation is worse in rural Khyber Pakhtunkhawa where 46% of the population is dependent on such sources and in Balochistan a shocking 72% lack access to safe water sources. Portable water in Pakistan is often contaminated by extremely hazardous elements such as turbidity, bacteriological contaminations, dissolved solids, nitrate and arsenic. Pakistan is one of those countries least likely to accomplish the sanitation target set out by the UN Millennium Development Goals (MDG). According to the World Health Organisation only 47% of people in Pakistan have access to sanitation. The target is to half the number of people without such access by 2015 and Pakistan is set to achieve this in 2025, an alarming ten years later than the MDG target.

Today, Pakistan is also counted amongst the world’s most arid countries. A study conducted by the Woodrow Wilson Centre in Washington shows that 90% of Pakistan’s fresh water is utilized for agricultural purposes. However, “intensive irrigation regimes and poor drainage practices have caused waterlogging and soil salinity throughout Pakistan’s countryside. As a result, vast expanses of the nation’s rich agricultural lands are too wet or salty to yield any meaningful harvests.” According to the study, by the year 2025 Pakistan’s annual water demand will exceed its supply by almost a 100 billion cubic meters.

The human right to water has been recognized constitutionally, legislatively, and judicially in Pakistan; its attainment, however, continues to be a major problem. With Pakistan one of the 17 countries currently facing a water shortage, and over 79 percent of water collected unsafe for drinking, the question arises as to why the adequate supply of water has not been met. The failure of the government and other stakeholders, including civil society members, to effectively provide for water rights can be attributed to challenges that confront many developing nations: corruption, the lack of human capital and technical expertise, and an inadequately trained regulatory work force. Moreover, Pakistan’s unique geopolitical and social realities make it extremely difficult for these rights to be realized, and unnecessary intrusions by international donor agencies into local affairs and policymaking also deprive citizens of their right to clean, safe water.