The HIV/AIDS Epidemic in Muslim Africa 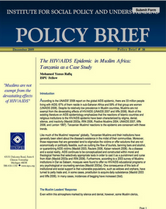 The HIV/AIDS Epidemic in Muslim Africa: Tanzania as a Case Study

According to the UNAIDS’ 2008 report on the global AIDS epidemic, there are 33 million people living with AIDS; 67% of them reside in sub-Saharan Africa and 59% of that group are women. Despite its relatively low prevalence in Muslim countries, Muslims are not exempt from the devastating effects of HIV/AIDS. Much of the existing literature on AIDS epidemiology emphasizes that the reaction of Islamic countries and religious institutions to the HIV/AIDS epidemic have been characterized by stigma, denial, silence, and inactivity. Tanzanian Muslims’ reactions to the epidemic are consonant with these trends.

Like much of the Muslims’ response globally, Tanzanian Muslims and their institutions have generally been silent about the disease’s existence in the midst of their communities. Moreover, those responses that are generated tend to stigmatize the victims or offer solutions that are not economically or politically feasible, such as curbing the flow of tourists, banning bars and alcohol, or quarantining AIDS victims. As a disease and a social reality, AIDS continues to be conceptualized and constructed within moral and theological frames that selectively appropriate texts in order to cast it as punishment and curse from Allah. Furthermore, according to a 2003 survey of Muslim institutions in Dar es Salaam, mosques were found to offer no HIV/AIDS educational programs or any psychological or counseling services. One consequence of this lack of institutional and social support is that vulnerable populations, such as widows and orphans, have turned to petty trade and, in some cases, prostitution to acquire daily subsistence. In many case, incidences of begging have increased.