The Greater Middle East Initiative: Off to a Shaky Start 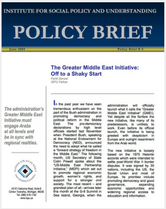 The Greater Middle East Initiative: Off to a Shaky Start

In the past year we have seen tremendous enthusiasm on the part of the Bush administration in promoting democracy and political reform in the Middle East. The pro-democracy declarations by high level officials started last November when President Bush, speaking at the National Endowment for Democracy (NED), announced the need to adopt what he called a “forward strategy of freedom in the Middle East.” The following month, US Secretary of State Colin Powell spoke about the “US-Middle East Partnership Initiative,” (MEPI) which set out to promote regional economic growth, women’s rights, and support for a stronger civil society. The most recent – and grandest plan of all –arrives later this month at the G-8 Summit in Sea Island, Georgia, when the administration will officially launch what it calls the “Greater Middle East Initiative” (GMEI). Yet despite all the fanfare the new initiative, like many of its predecessors, is unlikely to work. Even before its official launch, the initiative is being greeted with skepticism in Europe and outright resentment from the Arab world.