The Global Muslim Community at a Crossroads 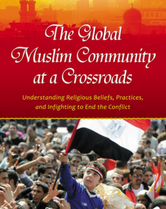 The Global Muslim Community at a Crossroads: Understanding Religious Beliefs, Practices, and Infighting to End the Conflict

Tackling a subject that is as timely as it is complex, this expert work examines the turmoil inside Muslim communities, helping outsiders to understand and insiders to examine ways in which Islam can be reinterpreted for a modern world.

Western countries, especially the United States, are spending billions of dollars to stop the rising tide of terrorism they attribute to Muslim communities, yet they don’t truly comprehend how Muslims perceive, or misperceive, world events. Where can solutions for the formidable issues facing the world Muslim community be found?

The Global Muslim Community at a Crossroads: Understanding Religious Beliefs, Practices, and Infighting to End the Conflict is an illuminating work. Written by an eminent psychologist who was raised as a Muslim in India and now resides in the United States, it examines the core reasons for the current state of affairs in Muslim communities, explaining the psychological underpinnings of Muslim religion and practices and the reasons they can fuel violence.

Drawing on the editor’s exposure to Eastern and Western cultures and his longstanding interest in the study of comparative world religions, this impartial analysis takes a multidimensional approach to explaining the current plight of Muslim countries. It candidly discusses issues such as the influence of Islamic schools, the negative and positive roles of Ulema (religious scholars), a lack of critical inquiry into religious thought, Sharia, and the status of women in Islam. Finally, there are positive suggestions about a road to recovery, explaining how Muslim communities can address the interlocking problems they face while retaining the positive aspects of their beliefs.