The Crisis in Darfur: Community Building and Identity Politics 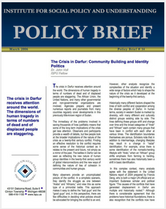 The Crisis in Darfur: Community Building and Identity Politics

The crisis in Darfur receives attention around the world. The dimensions of human tragedy in terms of numbers of dead and of displaced people are staggering. The African Union, the United Nations, and many other governmental and non-governmental organizations are involved. Agencies prepare and present numerous reports and journalists from many countries regularly cover developments in this previously little-known region of Sudan.

The immediacy of the problems involved in saving thousands of lives justifiably means that some of the long term implications of the crisis get less attention. Observers and participants provide a wealth of details, but few people look at the broader implications of the nature of the crisis as a twenty-first century conflict. Finding an effective resolution to the conflict requires some sense of the historical context as it relates to the present and future, not simply as a mirror of the past. The battles in Darfur can be seen as reflecting the new nature of human group identities in the twenty-first century world of global interconnections and the new ways of defining the nature of ties of cohesion in communities and human groups.