The Continuing Growth of Executive Power: The National Defense Authorization Act of 2012 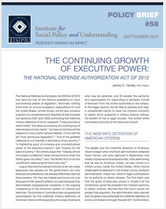 The Continuing Growth of Executive Power: The National Defense Authorization Act of 2012

The National Defense Authorization Act (NDAA) of 2012 has become one of the Obama presidency’s most controversial pieces of legislation. Nominally nothing more than an annual budgetary expenditure to fund the United States’ armed forces, the bill also contains a section on counterterrorism (Subtitle D) that includes two sections (1021 and 1022) authorizing the indefinite military detention of terror suspects. These provisions were initially “the obscure province of a small group of national security law nerds,” but have since become the subject of a very public national debate. Critics call the bill “truly pernicious legislation,” “one of the greatest rollbacks of civil liberties in the history of our country,” “a frightening grant of immense and unconstitutional power to the executive branch,” and “tyranny for the sake of tyranny.” But others argue that “nobody who is not subject to detention today will become so when the NDAA goes into effect” and “the NDAA 2012 is not the constitution-destroying bill that many fear.”

I argue here that the relevant provisions do not create expansive new powers for the government, but only because the presidency has already effectively claimed those powers. Yet they are indeed pernicious not only because of their specific effects, but also because they demonstrate congressional complicity in the ongoing unbalancing of the American system of checks and balances. The provisions 1) provide a clear congressional authorization for the indefinite military detention of American citizens while expanding the scope of persons who may be detained, and 2) transfer the authority and responsibility for responding to domestic crimes of terrorism from the civilian authorities to the military.

In the bigger picture, the bill fails to address and reign in presidential claims to have the inherent authority to detain terror suspects in military prisons without the benefit of trial or legal counsel. This further shifts unchecked authority to the executive branch.