The Causes of and Response to the Financial Panic of 2008: A Cautionary Tale 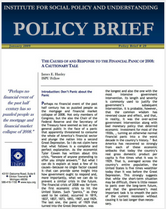 The Causes of and Response to the Financial Panic of 2008: A Cautionary Tale

Perhaps no financial event of the past half century has so puzzled people as the mortgage and financial market collapse of 2008. Not only members of Congress, but the also the Chair of the Federal Reserve and the Secretary of the Treasury have seemed as lost as the general public in the face of a panic that apparently threatened to consume the whole of America’s financial sector and plunge the nation into a second Great Depression. So I do not claim here that what follows is a complete and perfect explanation. As the economist Tyler Cowen has written about this crisis, “beware of anyone pretending to offer you simple answers.” But what I can do is explain at least a few of its
causes—because no single factor caused it—that can provide some insight into how government ought to respond and, more importantly, what we can do to prevent a similar crisis in the future. The financial crisis of 2008 was far from the first economic crisis to hit the United States. Such “panics,” as they used to be called, occurred in 1819, 1837, 1857, 1873, 1893, 1907, and 1929. The last one, the panic of 1929 that turned into the Great Depression, was the longest and also the one with the most intensive government intervention. Its length and severity is commonly used to justify the government’s subsequent intervention. It is probable, however, that the common wisdom has reversed cause and effect, and that, in reality, it was the over-active government intervention along with bad monetary policy that deterred economic investment for most of the 1930s, turning an otherwise normal financial panic into a the worst decade in the country’s history. But America has recovered so strongly from each of these economic setbacks that today the country’s real gross domestic product per capita is five times what it was in 1929. That is, averaged across the country’s entire population, the United States is five times wealthier today than it was before the Great Depression. This strongly suggests that while the short-term situation may be difficult, there is little reason to panic over the long-term future, and that the government’s most important task is to smooth the pain of the current recession without causing it to last longer than necessary.