The Bleeding of Iraq and the Rising Insurgency 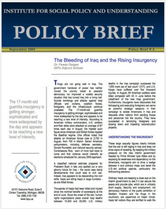 The Bleeding of Iraq and the Rising Insurgency

Things are not going well in Iraq. The government handover of power has neither moved the country closer to peaceful democracy nor improved a volatile security situation that has turned Iraq into a living hell. Suicide bombings and attacks against Iraqi officials and civilians, coalition forces, foreigners, and the infrastructure continue unabated. The 17-month-old guerrilla insurgency is getting stronger, sophisticated and more widespread by the day and appears to be reaching a new level of intensity. According to American military commanders, U.S. soldiers and their allies were attacked an average of 87 times each day in August, the highest such figure since American and British forces toppled the Baathist regime. One official noted that attacks on American forces rose to 2,700 in August, from 700 in March. Senior American policymakers, including defense secretary, Donald Rumsfeld, and national security adviser, Condoleezza Rice, warn of more bad news to come and that violence would intensify as elections scheduled for January 2005 approach.

A classified national estimate prepared for President Bush in late July spelled out a very gloomy future for Iraq – the worst case being developments that could lead to civil war. Indeed, Iraq appears to be descending into civil strife. Iraqis are killing Iraqis in large numbers – as are Allied forces.

Thousands of Iraqis had been killed and injured since the nominal transfer of sovereignty at the end of June. Since the onset of the war, human rights organizations place overall Iraqi deaths between 10,000 and 30,000. U.S. military deaths in the Iraq campaign surpassed the 1,000 mark (as of last count 1,017), and U.S. troops have suffered over five thousand injuries. In August, 64 American soldiers were killed compared with 43 in June before the installment of the new Iraqi government. Furthermore, insurgents have discovered that kidnapping and executing foreigners can serve as powerful strategic weapons in their campaign to isolate Americans in Iraq and dissuade other nations from sending troops and personnel into the country. They have succeeded in terrorizing foreigners and slowing down and impeding reconstruction projects.