The Audacity to Change: Reframing American Policy on the Israeli-Palestinian Conflict 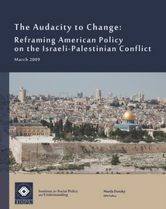 The Audacity to Change: Reframing American Policy on the Israeli-Palestinian Conflict

If the Obama administration is to succeed in steering Israelis and Palestinians toward a sustainable and just peace, it must rise to the challenge of reframing American policy on the conflict.

Having chanted the mantra of change that helped sweep him into the White House, Barack Obama now has the opportunity to channel that mantra into reframing American policy on the Israeli-Palestinian conflict He should seize that chance – because it will take a new way of seeing to fix a broken policy that has, for all its fanfare, failed to help Israelis and Palestinians arrive at a just and sustainable peace.

The Israeli-Palestinian conflict is more than sixty years old – and far from being merely a mediator and self-described “honest broker,” the United States has had both a vested strategic interest and an active hand in it for more than forty of those years. American policy has achieved some successes, notably brokering the Egyptian-Israeli and Israeli-Jordanian peace treaties and, in sporadic fits and starts, facilitating direct Israeli-Palestinian negotiations.

However, after so many years of direct American involvement, the conflict persists not only despite American policy but also in part because of it.

For decades, American policy has framed the overarching Israeli-Arab conflict in terms of twentieth-century national interests: containing Soviet encroachment in the oil-rich region and maintaining American hegemony there. At the beginning of the twenty-first century and the dawn of the Obama era, however, the United States – as the sole superpower – still pursues a largely unchanged policy on the conflict that has begun to double back on American interests, while at the same time engaging in everything from hearts and-minds public diplomacy to nation building to a “war on terror” throughout the region.

The policy does not only need to be rejuvenated with the fresh energy and good intentions of a new administration. More than that, the very premises on which American policy is based need to be reconsidered, reframed, and reformed – leading to a new perspective and approach as to how the United States will continue to engage in the Israeli-Palestinian conflict. Rather than focus on specific formulas for on-the ground disengagement and negotiation, this paper considers the broad parameters of how American policy should be reframed around paradigm shifts on three key issues:

Effecting change in the ethos of American policy will better enable Israel and the Palestinians to undertake the specific modalities and challenges of making, and finally achieving, peace.