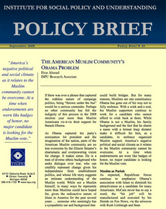 If there was ever a phrase that captured the ruthless nature of campaign politics, being “thrown under the bus” would be a serious contender. Perhaps no other community has felt the indignity of this process in the 2008 election year more than Muslim Americans vis-à-vis their support for Barack Obama.

As Obama captured his party’s nomination for president and the imagination of the nation, parts of the American Muslim community are no less overcome by the Illinois Senator’s charismatic and overpowering vision for change. It makes sense. He is a man of diverse ethnic background who seeks dialogue over war, who can credibly represent change given his independence from establishment politics, and whose life story suggests an intimate understanding of the Muslim world. While not a Muslim himself, in many ways he represents more than Muslims could have hoped for, given the radioactive nature of Islam in America for the past several years … someone who seemingly has a sympathetic ear and background that could build bridges. But for many reasons, Muslims are one constituency Obama has gone out of his way not to fully embrace. With a wink and a nod, his Muslim supporters continue to work for a candidate who cannot afford to wink back at them. While Obama is not a Muslim, his family background and the fact that he shares a name with a former Iraqi dictator make it difficult for him, as a candidate, to embrace organized Muslim support. America’s negative political and social climate as it relates to the Muslim community cannot be overcome. At a time when endorsements are worn like badges of honor, no major candidate is looking for the Muslim vote.