The 2004 Presidential Elections: What Should American Muslims Do? 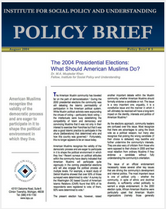 The 2004 Presidential Elections: What Should American Muslims Do?

The American Muslim community has traveled far on the path of democratization. During the 2000 presidential elections the community was still debating the Islamic permissibility of participation in the American political system. While Muslim political activists were expounding the virtues of voting – particularly block voting – the intellectuals were busy establishing the compatibility of Islam and democracy and convincing Muslims that it was not only in their interest to exercise their franchise but that it was also a good Islamic practice to participate in the shura (deliberations) that determined who and how this country was governed. Fortunately, this no longer appears to be an issue today.

American Muslims recognize the validity of the democratic process and are eager to participate in it to shape the political environment in which they live. Recent surveys on political attitudes within the community have clearly indicated that American Muslims will participate quite vigorously in the coming presidential elections and will also engage the political process at multiple levels. For example, a recent study of Detroit Muslims showed that over 93% of those surveyed were determined to vote. A survey by the Washington DC based Council of American Islamic Relations (CAIR) found that 93% of its respondents were registered to vote; of them, 92% were determined to vote.

The present election has, however, raised another important debate within the Muslim community: whether American Muslims should formally endorse a candidate or not. The issue is a very important one; arguably, it is a constitutive issue and the manner in which it will ultimately be resolved will have a long-term impact on the identity, interests and politics of American Muslims.