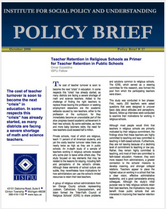 The cost of teacher turnover is soon to become the next “crisis” in education. In some respects this “crisis” has already started, as many districts are facing a severe shortage of math and science teachers. Added to the challenge of finding the right teachers to replace those leaving the profession or seeking employment elsewhere are the academic setbacks caused by new teachers, either to the profession or the curriculum, for they immediately become an unavoidable part of the slow progress toward academic achievement in their new schools. By some estimates, as more and more baby boomers retire, the need for new teachers could exceed half a million.

Private schools, most of which are religious, teach 11 percent of all American students, and yet the costly teacher turnover rates there are nearly twice as high as they are in public schools. An in-depth study of a sample of teachers working in religious schools revealed why some plan to leave while others stay. The study focused on key elements that may be related to the reasons for staying, including faith and perceptions of the school’s climate. Although these elements of school culture are subtle, they nevertheless have implications for how administrators can use the school’s limited resources to retain their best teachers.

A group of religious school administrators from ten Orange County schools representing Judaism, Catholicism, Episcopalianism, and Islam formed the “Inter-Faith Council of Religious Schools” (ICRS) to share problems and solutions common to religious schools. The ICRS, which served as a steering committee for this research, also formed the pool from which the participating teachers were drawn.

This study was conducted in two phases: First, nearly 200 teachers were asked questions that were designed to uncover basic data about attitudes and perceptions. Second, follow-up interviews were conducted to examine their motivations for working in religious schools.

Although most people would think that teachers in religious schools are primarily motivated by their religious commitment, the findings show that these teachers are highly committed to teaching and less committed to teaching in faith-based schools. Furthermore, they are not leaving because of a declining level of commitment to teaching or low pay. Rather, they remain highly committed to teaching, and most of them are committed to faith-based education. However, they want more respect from administrators, a greater connection to the schools’ missions to develop meaning, and stronger collegial relations. Teachers appear to place the highest value on working in a school that has a clear vision, effective administrative leadership, and a good camaraderie among colleagues. Although the study’s initial purpose was to help religious schools retain their best teachers, the implications may also benefit those public schools that are interested in improving their teacher retention rate.