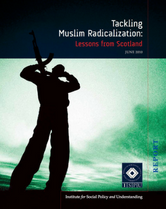 The 9/11 attack upon the United States awakened Washington to the danger of violent Muslim radicalization on its soil. In the long term, the only way to defeat radical Islamists is to reduce the motivation for Muslims to radicalize in the first place. This report explains the cutting-edge solution currently operating in Scotland.

Research into how Muslims become radicalized reveals that the crucial stage in this process occurs when young Muslims begin to believe that Islam justifies violence against innocent civilians and close their minds to other viewpoints. Such a belief must be cut off at the roots by challenging any interpretation that teaches Muslims that Islam condones violence against innocent civilians and replacing it with mainstream Islamic teachings. The SOLAS foundation in Scotland is currently engaged in this undertaking.

The clearest sign that a formal Islamic education prevents radicalization is the tiny percentage of violent Islamists – approximately 10% – who have actually been exposed to it. None of the perpetrators of the 9/11 attack, as well as those who carried out the 7/7 attack on London, had any kind of formal religious education from established and widely recognized educational establishments. The term is not intended to imply that there is one mainstream school of Islamic thought, for this is not the case. For instance, mainstream Wahhabi thought differs from mainstream Sufi thought. Within the context of this article, mainstream is used to distinguish these established, traditional schools of thought from younger, less authoritative teachings, some of which condone violence. For radical Islamists, mainstream Islamic scholarship and ethics are a very real threat, perhaps the biggest threat.

The SOLAS program discusses controversial issues in order to explain them, based upon scriptural Islamic sources, and to undermine any confusion that may have arisen about them. It also develops initiatives and programs that cater to different Muslim groups. For example, it addresses commonly held misperceptions within the community on issues that are most frequently exploited by radicals: jihad, citizenship and civic involvement, anti-Semitism, religious extremism, and others. By presenting mainstream Islamic teachings on these issues clearly and conclusively, aberrant views can be corrected and the motivation to radicalize undermined.

SOLAS seeks to prevent the production of radical Islamists; it does not dissuade those radicals committed to vigilante justice and terrorism. In other words, its degree of success will be represented by the quiet changing of minds; the gradual dwindling of traffic to radical websites; and, ultimately, fewer homegrown attacks being attempted, which means that fewer will have to be foiled.

The experience of SOLAS provides important lessons on how its program can be replicated elsewhere. This report distills some of those lessons, such as the need to find educators who have impeccable Islamic and secular educational credentials, who are knowledgeable or qualified in secular national law, and who are credible in the eyes of the young people they teach. Since radical narratives commonly regard the government as a “contaminated brand,” its explicit involvement can discredit any educational program with which it is involved or even associated.