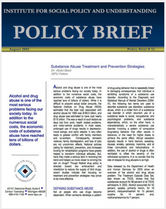 Alcohol and drug abuse is one of the most serious problems facing our society today. In addition to the numerous social costs, the economic costs of substance abuse have reached tens of billions of dollars. While it is difficult to pinpoint actual dollar amounts, the National Institute on Drug Abuse (NIDA) estimated that the total cost associated with alcohol abuse for 1995 was $166.5 billion, and drug abuse was estimated to have cost nearly $110 billion. This was a result of such factors as days lost from work, health related problems, and motor-vehicle accidents. In most cases, prolonged use of drugs results in depression, mood swings, and panic attacks. It very often leads to greater conflict with family members and co-workers. Consequently, domestic violence, family disintegration, and loss of jobs are not uncommon effects. National policies calling for treatment, prevention, and increased funding for rehabilitation programs have greatly helped to transform individual attitudes. But, have they made a serious dent in reversing the trend and helped us move closer to winning the war on drugs? Though federal drug policy is directed toward law enforcement and interdiction to reduce the supply of illicit drugs, recent studies indicate that focusing on treatment and prevention strategies may prove to be more effective.