Strong and Competitive: The American Economy in the Free Trade Era 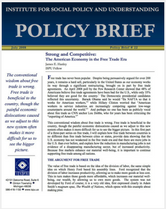 Strong and Competitive: The American Economy in the Free Trade Era

Free trade has never been popular. Despite being persuasively argued for over 200 years, it remains a hard sell, particularly in the United States as our economy works its way through a significant restructuring, brought on in part by free trade agreements. An April 2008 poll by the Pew Research Center showed that 48% of Americans believe free trade agreements have been bad for the U.S., while only 35% believed they are good for the country. The Democratic presidential candidates reflected this uncertainty. Barack Obama said he would “fix NAFTA so that it works for American workers,” while Hillary Clinton worried that “American workers in service industries are increasingly competing against low-wage counterparts around the world.” And perhaps no one has been as publicly vocal about free trade as CNN anchor Lou Dobbs, who for years has been criticizing the “exporting of America.”

This conventional wisdom about free trade is wrong. Free trade is beneficial to the country, though the painful economic dislocations caused as we adjust to this new system often makes it more difficult for us to see the bigger picture. In this first part of a three-part series on free trade, I will explain how free trade between countries is no different than free trade between cities or states, provide data showing that the U.S. economy has not weakened in the free trade era and that there are more jobs in the U.S. than ever before, and explain how the reduction in manufacturing jobs is not evidence of a disappearing manufacturing sector, but of increased productivity. Because free markets enhance our material well-being, it is important to continue supporting free trade among all nations.