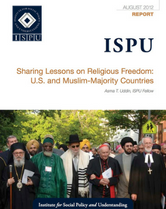 The Qur’an 2:256 states: “There is no compulsion in religion: Truth stands out clear from Error.” Countless scholars have translated these words over time according to their own linguistic and grammatical understandings, yet the main idea remains the same: People cannot be forced to believe or accept specific doctrines because genuine belief originates only within the self. As this is an internal and organic process, it is natural for human beings to think and search for purpose. For these reasons, the U.S. Constitution, the Universal Declaration of Human Rights (UDHR), and similar documents have enshrined the freedom of religion or belief as a fundamental human right.

Despite the international protection of religious freedom, an estimated 70 percent of the world’s population live in countries that severely limit religious liberty. This is especially true in many Muslim countries, where institutional barriers to religious liberty such as apostasy and blasphemy laws make the free practice of faith difficult. While the Qur’an commands, “Let there be no compulsion in religion,” many Muslim countries nevertheless severely limit religious liberty and force both Muslims and non-Muslims to live in precarious and oppressive environments.

In “The Trouble with American Foreign Policy and Islam,” Thomas Farr argues that no society can flourish as a stable democracy in the absence of religious liberty, and that repressive countries will continue to lag far behind their more progressive and inclusive counterparts until they become more protective of religious liberty. He also points out that studies have connected the lack of religious freedom with terrorism, which makes the former a national security issue: “The logic is simple, but compelling: even if the military threat of radicalism is curbed, nations like Iraq, Pakistan, and Afghanistan are unlikely to remain stable—and to reject extremist Islamist political theologies—unless they address the issue of religious freedom successfully.”

In addition to the fact that, in the modern world, religious liberty is essential to a country’s stability and to global security, it is also imperative to reevaluate and communicate religious liberty anew to Muslim countries because of our evolving understanding of religious and political identity. In Freedom of Religion, Apostasy, and Islam, Hassan Saeed and Abdullah Saeed argue that apostasy laws were formulated in a religio-political landscape that differs dramatically from its contemporary counterparts. Thus, these laws have, in effect, been rendered obsolete. For example, during the pre-modern era when religious identity and political identity were practically synonymous, rejecting or leaving Islam was roughly equivalent to high treason, for both were seen as rejecting the Muslim ruler’s political authority. In addition, it was assumed that such people would likely join the enemy’s armed forces. But today, political and religious identities are considered largely independent of one another and leaving a religious tradition does not connote military desertion, political subversion, or potential armed rebellion. Recognizing this fact, most Muslim countries have abandoned the death penalty for apostasy.

Some Muslim countries have adopted a progressive approach toward abolishing apostasy laws; others maintain laws against what is considered blasphemous, hateful, or defamatory speech regarding Islam and Prophet Muhammad. As will be detailed below, the vagueness and over breadth of such laws leave them open to abuses, and they are often used to intimidate or silence political opponents and public intellectuals who challenge the status quo and are perceived by political or religious authorities as threats to existing power structures. In contrast, unlike many Muslim-majority countries where constitutional guarantees of religious freedom are routinely violated by government actions, religious freedom in the U.S. is not only guaranteed by the Constitution and various federal and state statutes, it is also implemented.

Despite the ongoing “culture wars” between secularists and those wanting broad rights for religious groups and individuals, there is ample space in the U.S. for vibrant, robust religious expression in the public square, making America the global leader in religious liberty. This paper examines why American Muslims enjoy a high degree of religious freedom, whereas their coreligionists in many Muslim countries do not. It begins by explaining why the concept of religious freedom needs to be communicated differently to Muslims abroad and then provides various ways of doing so. The paper then analyzes religious freedom protections in Muslim-majority countries and the U.S. It concludes by explaining how this conversation about religious freedom offers a unique opportunity for building bridges between the United States and Muslim-majority countries, particularly by highlighting potential American contributions to human rights reforms in Muslim countries.