Shari’a Law: Coming to a Courthouse near You?: What Shari’a Really Means to American Muslims 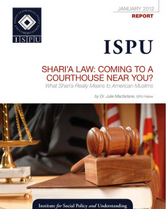 Shari’a Law: Coming to a Courthouse near You?: What Shari’a Really Means to American Muslims

This is the first empirical study to ask North American Muslims what shari’a means to them in their everyday lives. The study demonstrates that the present “moral panic” over shari’a and its alleged impact on American legal and social culture is wildly overblown. For most American Muslims shari’a represents a private system of morality and identity, primarily focused on marriage and divorce rituals. None of the American Muslims interviewed for this study expected American courts to enforce shari’a. Just like other Americans, they will access the courts for adjudication according to American family law if they cannot make a private agreement (relating to divorce) that meets their needs and values.

American courts are sometimes asked to adjudicate disputes that have been originally adjudicated in a Muslim country overseas, and/or refer to Islamic law or shari’a derived principles. American courts will not recognize either the order of a Muslim court in another country or a private agreement referring to Islamic law or shari’a principles if this violates public policy principles of fairness and due process, does not meet the standard for a legally enforceable agreement (e.g. clarity, consensuality), or involves the court in the interpretation of religious dogma. As a result American courts approve very few cases involving Islamic law (usually marriage contracts, divorce settlements, and occasionally private commercial contracts).

This status quo is widely accepted by American Muslims who, in common with other religious groups, regard their faith-based practices as a private matter and the courts as a place for adjudication according to the principles of American law. The vast majority of respondents in this study saw no incompatibility between their Islamic obligations and their recourse to the civil courts.

The public discourse, however, contains great confusion about the relationship among the courts, the state, and shari’a, a reality that is being exploited for political purposes and expressed in increasing anti-Muslim hostility. Inaccurate and sometimes hateful claims about the way American Muslims understand their religious obligations and cultural norms mask the complex relationship between private religious and cultural choices and universal state protections.

This report considers two potential strategies for ameliorating some of these concerns and enhancing the status quo. Many respondents felt that the courts presently operate with little or no knowledge of Islam or Islamic law and without regard or respect for their beliefs. Without making structural changes, this problem could be addressed by enhanced education for both judges and Muslim religious leaders that deepens their understanding of each system and promotes co-operation between the facilitators of Islamic processes and the courts. There are already signs of mutual influence between the two systems, with many imams incorporating civil law principles into their advice on marriage and divorce agreements, and the courts increasingly asked to consider the lived-experiences of Islamic marriage and divorce as part of the context of a marital dispute. a stronger base of knowledge among judges of Islamic family law traditions would enable the development of jurisprudence that understands and respects these processes.

A second strategy suggested by this research is the promotion – by Muslim leaders and organizations – of Islamic family services that focus on the community’s needs and reflect the values and expertise of its own professionals. A family services marketplace could offer family services both inside and outside the mosques, deploying the skills of a range of professionals, reducing pressure on the imams, and providing broader and more inclusive programs and services. Another far more radical approach often debated in the media is the establishment of a parallel independent Islamic tribunal with jurisdiction over family law. Although widely discussed in scholarly literature and media reporting, this study found virtually no support for such an approach among American Muslims. Assessing and choosing an appropriate policy approach is critical for navigating not only issues related to American Muslims, but all religious groups.