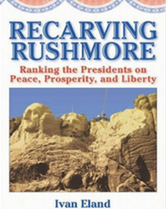 Profiling each president on the merits of their policies and on the core principles of peace, prosperity, and liberty, this ranking system takes a distinctly new approach. Historians and scholars have long tended to respect the war heroes and men who have succeeded in expanding the power of the executive office. However, this new examination cuts through longstanding bias and political rhetoric to offer a new nonpartisan system of ranking that is based purely on strength of policies and adherence to the Founding Father’s guidelines for limited government. These rankings will surprise most and enlighten even acknowledged experts on the presidency.