Putting the Immigration Debate into Context 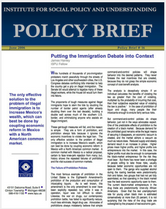 Putting the Immigration Debate into Context

While hundreds of thousands of pro-immigration protesters march peacefully through the streets of Los Angeles and other southwestern cities, the U.S. Congress debates conflicting bills intended to help the country get a grip on illegal immigration. The Senate bill would attempt to legalize many of these illegal workers, while the House bill would turn them into felons.

The proponents of tough measures against illegal immigrants hope to stem the tide by doubling the number of border patrol agents (after already doubling them over the last decade), building a double wall across much of the southern U.S. border, and criminalizing anyone who assists an illegal immigrant.

These get-tough measures will fail, and the reason is simple: They are a form of prohibition, and prohibition always fails because it ignores the economic incentives to violate the legal ban. The only effective solution to the problem of illegal immigration is to increase Mexico’s wealth, which can best be done by coupling economic reform in Mexico with a North American common market. A common market with Mexico is a radical proposal, certain to face knee-jerk rejection from many; but, history shows the repeated failures of prohibition and the vital success of common markets.