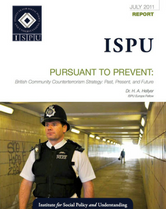 After the 7/7 bombings in London, the British government developed a full and engaged community counterterrorism strategy. Eventually entitled “Prevent” in 2006, it sought to prevent any indigenous Muslims from embracing violent extremism. Community engagement, whether done by the police, the Home office, the Foreign office, or the Department of Communities and Local Government (DCLG), was vital. Yet the strategy itself was constantly fraught with changes, debates, and discussions about the “proper direction” to be pursued. Between July 2005 and May 2010, the ruling Labour government was divided over the best approach to these matters. Once a minister was changed (e.g., the Minister for the DCLG), the strategy could take an entirely different direction. as the fifth anniversary of the 7/7 bombings drew near, it was clear that Prevent had become so controversial that unless crucial changes were implemented, its very existence could not be guaranteed.

While these election results made a coalition the most attractive option for both parties, they have left British counterterrorism strategy in something of a flux. It is still not really clear where the UK is headed, for a government governed by a single party can often be divided on a critical issue. This was clear with regard to the Prevent strategy during the Labour years. But within a coalition made up of even more diverse viewpoints, it becomes even harder to identify just what the overarching strategy actually is.

Nevertheless, some trends can be discerned. The new government has already carried out some actions that point to some key assumptions and theories that underpin its thinking. I hope to contribute to a better understanding of these trends by exploring their meaning. In other words, what lessons can we learn from our past and present in order to effect good for our country in the future? Such lessons remain deeply important not just for Britons, but also for the many other countries that also learn from our experiences.