Postmodernism and Islam: Predicament and Promise 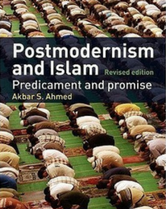 Postmodernism and Islam: Predicament and Promise

In this remarkable and accomplished book Professor Akbar Ahmed is a friendly and knowledgeable companion through the thickets of Western culture and Islamic culture. As one of the world’s leading Islamic scholars and an incisive Muslim commentator on the West, he is in a unique position to offer an indispensable guide to these complicated and vexed questions. He writes with a clear moral purpose: to reduce misunderstandings between East and West and to make what seems alien and strange to each culture intelligible. Why do Muslims want to kill Salman Rushdie? How can the study of the Greek gods help to make sense of the current perceptions and misperceptions in East-West relations? Will Islam replace Communism as the new enemy of the West? What is the relevance of postmodernism to Islam? Can West and East ever understand each other? In exploring these questions Professor Ahmed goes back into history and looks into the future. Emphasizing the role of the mass media in shaping our mental map of East-West relations, he analyzes the ways the media turned the Rushdie affair and the Gulf war into a carnival of spectacle and entertainment. He makes use of the postmodern theme of the displaced, circulating image to show how images are used to tell stories – stories which are not always helpful or accurate. Written with panache and an unswerving fidelity to truth Postmodernism and Islam will help us to understand our times. Above all, it will be seen as a major inquiry in the study of Islamic and Christian relations.