Palestine, Israel, and the United States: Reframing the Dominant Narrative 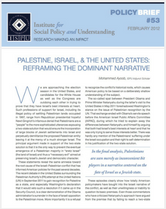 Palestine, Israel, and the United States: Reframing the Dominant Narrative

We are approaching the election season in the United States, and candidates for the White House as well as the Congress are outdoing each other in trying to prove that they have Israel’s best interests at heart. Such professions of support for Israel, including its illegal policy of settling Palestinian lands occupied in 1967, range from Republican presidential hopeful Newt Gingrich’s infamous denial that Palestinians are a “people” to the more sophisticated utterances espousing a two-state solution that would ensure the incorporation of large blocks of Jewish settlements into Israel and perpetually demilitarize the proposed Palestinian entity leaving it at the mercy of a much stronger Israel. The principal argument made in support of the two-state solution is that it is the only way to prevent the eventual emergence of a Palestinian majority in “eretz Israel” (the land of Israel) and thus a “necessary evil” aimed at preserving Israel’s Jewish and democratic character.

These statements reveal the same amnesia toward the root cause of the Israeli-Palestinian conflict that has informed American policies for the past several decades. The recent debate in the United States surrounding the Palestinian Authority’s (PA) attempt at the United Nations (UN) in September 2011 to gain recognition for Palestine as a state, and especially Washington’s declaration that it would veto such a resolution if it came up in the Security Council, is a clear demonstration of the Obama administration’s surrender in the face of Israeli opposition to the Palestinian move. More importantly it is a refusal to recognize the conflict’s historical roots, which causes American policy to be based on a deliberately shallow understanding of the subject.

The so-called spat between President Obama and Prime Minister Netanyahu during the latter’s visit to the United States in May 2011 foreshadowed Washington’s stance on the issue of Palestinian recognition by the UN. That exchange ended with Obama’s servile speech before the American Israel Public Affairs Committee (AIPAC), during which he tried to explain away the differences between Netanyahu and himself by arguing that both had Israel’s best interests at heart and that he was only trying to serve those interests better. There was hardly any mention of the Palestinians’ suffering under the Israeli occupation and their right to self-determination in his justification of the two-state solution.

These episodes clearly show how totally American policymakers have bought into the Israeli narrative of the conflict, as well as their unwillingness or inability to question its basic premises. Even those commentators who have criticized Netanyahu’s approach have argued from the premise that by failing to reach a two-state deal within the very near future and, by implication, not accepting some sort of UN resolution that would confer titular statehood on Palestine, Netanyahu is harming long-term Israeli interests. According to these critics, the prime minister is ignoring the ticking Palestinian demographic time bomb that would soon render Jews a minority in the land between the Mediterranean Sea and the Jordan River and thereby put paid to the Zionist dream of a Jewish state.