Organizations at War in Afghanistan and Beyond 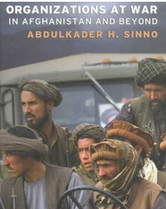 Organizations at War in Afghanistan and Beyond

Abdulkader H. Sinno closely examines the fortunes of the various factions in Afghanistan, including the mujahideen and the Taliban, that have been fighting each other and foreign armies since the 1979 Soviet invasion. Focusing on the organization of the combatants, Sinno offers a new understanding of the course and outcome of such conflicts. Employing a wide range of sources, including his own fieldwork in Afghanistan and statistical data on conflicts across the region, Sinno contends that in Afghanistan, the groups that have outperformed and outlasted their opponents have done so because of their successful organization. Each organization’s ability to mobilize effectively, execute strategy, coordinate efforts, manage disunity, and process information depends on how well its structure matches its ability to keep its rivals at bay.