Opposing the Rise of State-Sponsored Islamophobia 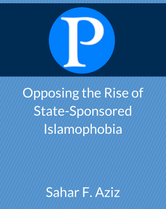 Opposing the Rise of State-Sponsored Islamophobia

Trump’s electoral victory exposed our deep divisions. As some Americans believed we were progressing toward a more inclusive, post-racial society, a countercurrent of hate was swelling. With every step forward toward acceptance of difference in our multicultural society, our country was taking two steps back, to suspicion and hatred of the “other.”

The election of the first African American president, along with changing racial demographics, multiplied the number and ferocity of rightwing extremists. White nationalist groups experienced a boom in recruitment. According to the Southern Poverty Law Center, the number of anti-Muslim hate groups nearly tripled between 2015 and 2016, from 34 to 101.

Yet many Americans were oblivious to this hate frothing underneath the thin veneer of American pluralism, diversity, and inclusiveness. So when Trump’s bigoted statements against Muslims, Mexicans, and women whisked him to a presidential victory, some were shocked to realize that America is not so inclusive or religiously tolerant.

Trump’s victory exposed that opposition to the Black Lives Matter movement was not about ensuring that all lives matter. Rather, it was a white nationalist counter-movement rejecting changes to a racialized criminal justice system that disproportionately incarcerates and kills black men and women.

Betraying America’s identity as a nation of immigrants that welcomed tens of millions of Irish, Germans, Catholics, and Jews fleeing economic and political deprivation, Trump shut our borders to the world’s most vulnerable.

Despite having endured horrific war crimes by both the Assad regime and ISIS, the Trump Administration condemned Syrian refugees as terrorists. Through an executive order issued just days after his Inauguration, Trump followed through on his campaign promise to ban Syrians from entry. What is their offense? Being Muslim. Guilt by association, not individual responsibility, animates this partial “Muslim ban.”

Trump’s executive order barred anyone from seven Muslim-majority countries from entering the United States. Tens of thousands of permanent residents with homes, jobs, and American-citizen children, as well as students and workers who have invested money and time into building our economy, were suddenly personae non gratae. Their offense? Being Muslim. We know this because Trump’s order made an exception for Christian refugees.

That our military’s occupation of Iraq contributed to the chaos that strengthened Al-Qaeda and subsequently created ISIS is of no consequence. We send in troops, drop air bombs, and deploy thousands of drones in Muslim-majority countries and then blame Muslims for the terrorism our military has unleashed.

To Muslim Americans, including me, this rise of state-sponsored Islamophobia comes as no surprise. It is a culmination of sixteen years of growing anti-Muslim prejudice festering in American society, with tangible adverse effects on people’s daily lives.

Since 2005, according to the American Civil Liberties Union, more than 220 mosques across the country have been vandalized or subjected to threats of violence. Muslim women wearing headscarves are marked as terrorist “others,” and consequently assaulted and harassed.

Hate crimes against Muslims have risen at alarming rates. In 2000, the FBI reported 28 anti-Muslim hate crimes. In 2001, the number jumped to 481. More than fourteen years after the 9/11 terrorist attacks, anti-Muslim hate crimes jumped from 154 in 2014 to 257 in 2015. Such numbers are disproportionately high for a demographic group that comprises approximately 1 percent of the American population.

Anti-Muslim bias also rears its ugly head in workplaces and schools. In a 2016 poll, the Institute for Social Policy and Understanding, where I am a fellow, found that the majority of American Muslims reported experiencing some level of discrimination in the past year, with nearly one in five reporting experiencing it regularly. Muslim employees are subjected to racial and religious slurs that conflate Islam with terrorism, disloyalty, and foreignness.

Muslim schoolchildren also suffer harm when their peers translate the Islamophobia taught at the dinner table, through the media, and by elected officials into bullying. Some school administrators and teachers have abused their authority by accusing Muslim children of terrorist acts.

Alongside these troubling trends, however, are acts of kindness and solidarity with Muslim communities, supported by a broad swath of Americans. Tens of thousands of people marched in the streets and protested at airports across the country condemning Trump’s partial “Muslim ban” as discriminatory and un-American. Interfaith groups stood with Muslims to condemn excluding refugees and immigrants on the basis of religion. And when a mosque in Victoria, Texas, was burnt to the ground in late January, the Jewish community offered its synagogue for Muslims to pray in.

Such overtures demonstrate that although Trump and his anti-Muslim advisers occupy the White House, their far-right political agenda is not representative of many Americans. Some are appalled at the President’s bigoted agenda and are looking for ways to show that they do not share his racism, xenophobia, misogyny, and Islamophobia.

To such individuals, I offer this list of ways that ordinary people can empower themselves and their communities to ensure that state-sponsored Islamophobia and other forms of bigotry are not perpetuated:

1. Stay informed about the myriad ways in which Islamophobia is manifested.Organizations that offer comprehensive and up-to-date information include the Southern Poverty Law Center, the Council on American-Islamic Relations, the American Civil Liberties Union, the Brennan Center for Justice, and the American-Arab Anti-Discrimination Committee. The Institute for Social Policy and Understanding offers a bibliography of books about Muslims and Islam in the United States, as well as extensive research about Muslim Americans.

2. Join a community group that aims to bring together people of different faiths, races, or classes to work on social justice issues. This offers an opportunity to meet people of different faiths and life experiences to enrich your own life and understanding of America’s diversity. If you attend a house of worship, ask your faith leaders how you can participate in interfaith dialogues. Alternatively, a simple Internet search can identify social justice coalitions working in your local community.

3. Communicate regularly to your elected officials your opposition to anti-Muslim legislation or actions. Supporters of tolerance and religious plurality must compete with the cacophony of odious messages emboldened by Trump’s victory. If politicians only hear the hateful and fear-ridden messages that stereotype Muslims and Islam as threats, they will believe they have license to discriminate under the guise of national security. Your silence may be interpreted as consent on important issues that impose tangible harms on your Muslim neighbors.

4. Exercise your First Amendment right to participate in marches and protests in support of Syrian refugees and the civil rights of Muslims. The more diverse the crowds in the streets, the more government officials can see for themselves that there are more Americans who oppose discrimination against Muslims than those who support such discrimination.

5. Be the change you seek in your neighborhood, school, workplace, and community. Rather than wait for others to host the event that you believe is needed to counter stereotypes, take a leading role in organizing it. Reach out to your friends, neighbors, and colleagues to identify who wants to collaborate with you in the planning.

Through our deeds and our words, we have the power to make the ideal of American religious freedom as much a reality for Muslims and other religious minorities as it is for members of the majority.

This article originally appeared in The Progressive on March 25, 2017