No Shortcuts: U.S. Policy and the Challenge of Stabilizing Pakistan 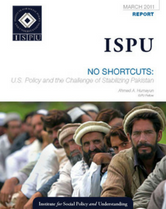 No Shortcuts: U.S. Policy and the Challenge of Stabilizing Pakistan

The stability of Pakistan, a nuclear-armed state in a troubled region, presents a formidable challenge for the United States. Pakistan-based militant groups undermine the country’s security, help fuel the insurgency in Afghanistan, and increasingly endanger the American homeland. By one estimate, a majority of all “serious” terrorist plots against the West since 2004 have been linked to al-Qaeda or related entities inside Pakistan.

Despite these threats, Pakistan’s fractious politics has impeded the development of a systematic counterterrorism strategy. Constant tension between the military and civilian poles of power, and among the civilians themselves, has deflected attention away from militancy. the views of the Pakistani public present additional complications: it is against extremism but ambivalent about military operations, for democracy but harshly critical of civilian rule.

Much recent discussion in Washington has focused on how to induce or compel Islamabad to expand military operations against militant havens in Pakistan’s tribal areas. This emphasis is understandable, but it is important not to neglect other critical factors relevant to the country’s stability. There are two intertwined dimensions of Pakistan’s current struggle for survival: the military war against militancy and the political struggle for democracy. Focusing on one aspect at the expense of the other is to strive for short-term tactical advantage at the potential cost of long-term strategic failure.

This report identifies the key trends in Pakistan’s stability over the last two years, and evaluates their implications for U.S. policy. In recent years, critical shifts have occurred: in 2008 a civilian government was democratically restored to power after almost a decade of dictatorship, and in 2009 the Pakistani army began significant military operations against militants. Major shifts in U.S. policy also occurred concurrently: in March 2009 the Obama administration announced a new integrated strategy for Afghanistan and Pakistan, one that emphasized the importance of winning the war against extremism in Pakistan.

It is now possible to assess how these changed conditions have affected Pakistan and what insights they suggest for future policy. Pakistan has made important progress against militancy since 2009, but it is still ambivalent about fully confronting all jihadist groups. Thus far, internal political developments have been primarily responsible for shifting the country toward a more robust anti-militant posture, although the United States has played a key enabling role through financial assistance and diplomatic engagement. At the same time, however, it has become increasingly clear that the United States is constrained in its ability to affect transformative change in the Pakistani state’s behavior.

The report is divided into five parts: Part I outlines the historic roots of Pakistan’s instability, Part II explores the military war against the insurgency since 2009, Part III assesses the ongoing competition between the civilian government and the military regime, and Part IV evaluates the unique policy challenges that Pakistan poses to the United States.

Part V concludes the report by arguing that the United States should have a long-term strategy to ameliorate the underlying conditions that have fostered Pakistan-based militancy. In particular, it should seek to stabilize Pakistan’s democracy, encourage more effective counterinsurgency efforts, reduce Indian-Pakistani tensions, and bring in regional stakeholders. In the meantime, the United States should expect progress to be slow and incremental, rather than conclusive