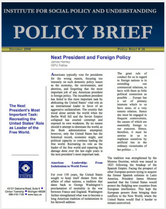 Americans typically vote for presidents for the wrong reason, focusing too intensely on such domestic policy issues as the economy, the environment, and abortion, and forgetting that the most important job of any American president is foreign policy. The incumbent president has failed in this most important task by abdicating the United States’ vital role as an international leader in favor of an aggressive unilateralism. The country that stood alone astride the world when the Berlin Wall fell and the Soviet Empire collapsed has courted contempt and exposed its own weakness. By no means should it attempt to dominate the world, as the Bush administration attempted; however, only the United States has the historical record, economic might, and political capacity to continue leading the free world. Recreating its role as the leader of the free world and repairing the damage done over the last eight years is the next president’s most important task.