Muslims of Europe: The ‘Other’ Europeans 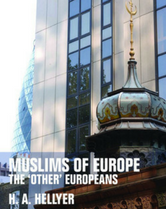 Muslims of Europe: The ‘Other’ Europeans

The interchange between Muslims and Europe has a long and complicated history, dating back to before the idea of ‘Europe’ was born, and the earliest years of Islam. There has been a Muslim presence on the European continent before, but never has it been so significant, particularly in Western Europe. With more Muslims in Europe than in many countries of the Muslim world, they have found themselves in the position of challenging what it means to be a European in a secular society of the 21st century. At the same time, the European context has caused many Muslims to re-think what is essential to them in religious terms in their new reality.

In this work, H.A. Hellyer analyses the prospects for a European future where pluralism is accepted within unified societies, and the presence of a Muslim community that is of Europe, not simply in it.