Muslims in France: French or Muslim, What Is the Choice? 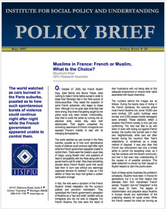 Muslims in France: French or Muslim, What Is the Choice?

France is a nation predicated on the concept of laïcité, the absolute separation of church and state. Further, the mere term “French Muslim” is anathema to French political identity. The concept of a community organized along ethnic or religious lines, as exists in the United States, is in itself abhorrent due to the French belief that everyone is equally and foremost French. Not only is there no French counterpart to the National Italian-American Foundation, there is also no equivalent to the Council on American-Islamic Relations. In fact, any attempt to organize along such lines for either professional affiliations (e.g., a Muslim lawyers’ organization) or to pursue a specific issue (e.g., getting halal food served in the public schools) would be prohibited as being communitarian.

Muslims have been in France for generations, but it is not their religion that alienates them from mainstream French society. “Equality” and not “integration” is the main issue for them. The degree of misinformation and prejudice about Muslims in Europe clouds any examination of the underlying reasons for social unrest.