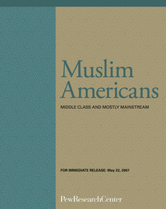 Muslims constitute a growing and increasingly important segment of American society. Yet there is surprisingly little quantitative research about the attitudes and opinions of this segment of the public for two reasons. First, the U.S. Census is forbidden by law from asking questions about religious belief and affiliation, and, as a result, we know very little about the basic demographic characteristics of Muslim Americans. Second, Muslim Americans comprise such a small percentage of the U.S. population that general population surveys do not interview a sufficient number of them to allow for meaningful analysis.

This Pew Research Center study is therefore the first ever nationwide survey to attempt to measure rigorously the demographics, attitudes and experiences of Muslim Americans. It builds on surveys conducted in 2006 by the Pew Global Attitudes Project of Muslim minority publics in Great Britain, France, Germany and Spain. The Muslim American survey also follows on Pew’s global surveys conducted over the past five years with more than 30,000 Muslims in 22 nations around the world since 2002.

The methodological approach employed was the most comprehensive ever used to study Muslim Americans. Nearly 60,000 respondents were interviewed to find a representative sample of Muslims. Interviews were conducted in Arabic, Urdu and Farsi, as well as English. Sub- samples of the national poll were large enough to explore how various subgroups of the population — including recent immigrants, native-born converts, and selected ethnic groups including those of Arab, Pakistani, and African American heritage — differ in their attitudes.

The survey also contrasts the views of the Muslim population as a whole with those of the U.S. general population, and with the attitudes of Muslims all around the world, including Western Europe. Finally, findings from the survey make important contributions to the debate over the total size of the Muslim American population.

The Institute for Social Policy and Understanding provided assistance with focus group work that helped shape the survey questionnaire.