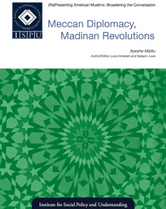 This report includes Ayesha Mattu’s presentation from Session 2 of the (Re)Presenting American Muslims conference, which explored how American Muslim storytellers can tell more diverse, complex, and authentic narratives about Muslims in America.

On Friday and Saturday, April 11 and 12, 2014, the Alwaleed Islamic Studies Program at Harvard University hosted a two-day workshop (Re)Presenting American Muslims: Broadening the Conversation to discuss the ways in which American Muslims define themselves, and are defined, in the twenty-first century. The workshop brought together a diverse slate of American Muslim activists, artists, scholars and advocates in a constructive dialogue on a wide range of issues affecting Muslims in the United States. In five sessions over two days, the group addressed challenges regarding the ideas of American Muslim identity and representation while encouraging a discussion of the opportunities and a broader view of the communities encompassed in the umbrella term “American Muslims.”