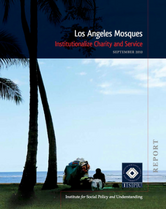 Muslims often highlight Islam’s emphasis on helping the disadvantaged (orphans, prisoners, slaves, the poor, the weak, and the hungry) and promoting justice and equality. Yet the findings presented here suggest that most community leaders feel that the current level of social service provided is deficient. Furthermore, the comments of mosque officials interviewed across ten Islamic centers in Los Angeles, regardless of their level of service activity, reveals that the services provided by Muslims are below the community’s potential. While social service activity is said to be a community priority, officials cited countless obstacles in pursuing these activities, including human resource challenges and the lack of financial support.

This report demonstrates the increasing concern among American Muslim communities for a fuller integration into the American mainstream and for making more contributions to the greater society. A significant number of Muslims are perhaps beginning to see themselves as a positive element that contributes to the progress of our nation and the world at large. This is, at least, the vision that many leaders seem to have for their communities. We hope this report will be of interest to the general public, scholars, and policymakers who seek to better understand this particular community’s practices and visions.