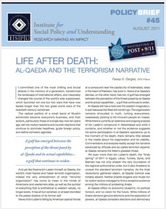 Life after Death: Al-Qaeda and the Terrorism Narrative

It committed one of the most chilling and brutal attacks in the memory of a generation, transformed the landscape of international affairs, and inexorably changed the course of the world’s sole superpower, which launched not one but two wars that have now lasted longer than the two great world wars of the twentieth century combined.

The radical politics of a small band of Muslim extremists became everyone’s business, and their actions, particularly those of a single day now ten years ago, set into motion reactions and counter-reactions that continue to dominate headlines, guide foreign policy, and define domestic agendas.