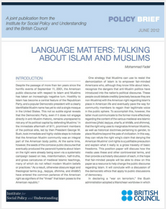 Despite the passage of more than ten years since the horrific events of September 11, 2001, the American public discourse with respect to Islam and Muslims has taken an increasingly negative turn. Hostility to Islam has become a central feature of the Republican Party, and a popular Democratic president with a clearly identifiable Muslim name has yet to visit a single mosque in the United States. This not so subtle signal reveals that the Democratic Party, even if it does not engage directly in anti-Muslim rhetoric, remains unprepared to risk any of its political capital by defending Muslims. In the immediate aftermath of 9/11, prominent members of the political elite, led by then President George W. Bush, took immediate and highly visible steps to indicate that the American Muslim community was an integral part of the American body politic. At the same time, however, the seeds of the corrosive public discourse that eventually produced the paranoid hysteria about Islam on the right were already being sown via a systematic campaign based on lies, misinformation, half-truths, and gross caricatures of medieval Islamic teachings, many of which do not reflect modern Muslim beliefs or practices. As a result, otherwise obscure legal and theological terms (e.g., taqiyya, dhimma, and khila fa¯) have entered the common parlance of the American right as signifiers of the “threat” that Islam poses to the American republic.

One strategy that Muslims can use to resist the demonization of Islam is to empower fair-minded Americans who, although they know little about Islam, recognize the dangers that anti-Muslim politics have introduced into the nation’s political discourse. These people could debate credibly (precisely because they are non-Muslims) with the American right regarding Islam’s place in American life and eventually pave the way for community members to regain their legitimate voice in the public sphere. To accomplish this, however, the latter must communicate to the former more effectively regarding the content of the various medieval-era Islamic doctrines (jihad¯, taqiyya, shar¯ i‘a, al-khila fa¯, and dhimma), that the right wing uses to marginalize American Muslims, as well as historical doctrines pertaining to gender, to place Muslims beyond the pale of civilization. In this way, they can refute the right wing’s claim that denying the American Muslims’ civil rights is a justifiable precaution and explain what it really is: a gross travesty of basic freedoms. This position paper will discuss how the media uses these and other controversial terms, and then provide a scholarly discussion of each, in the hope that fair-minded people will be able to draw on this paper as a resource to help change the public discourse regarding Islam. It will conclude with a discussion of the democratic ethics that apply to public discussions of democracy.

In declaring a “war on terrorism,” the Bush administration adopted a Manichean worldview in which everyone was forced to take sides: either one was with the Americans (i.e., the Bush administration) or with al-Qaida. Muslims were quickly classified into two groups: moderates and extremists. The government dutifully declared that the vast majority of Muslims, both in the United States and worldwide, were peaceful moderates and that only a very small minority fell into the camp of the violent extremists who had perpetrated 9/11. Such a division was clearly reductionist. Even if it was motivated by the right reasons, it had a sinister effect: American Muslims were effectively stripped of their practical ability to criticize, at least publicly, American policies in the Islamic world in general or the conduct of the “war on terror” in particular. Their position only became more and more untenable due to the vehemence with which the administration pursued this “war.” Believing that it was not sufficient to target al-Qaida, the administration began to target any insurgency involving Muslims. Thus Muslim resistance movements in Palestine, Chechnya, and Kashmir, among others, became associated with al-Qaida, even though they had started long before al-Qaida even existed, were motivated by well-recognized and understood local grievances, and were operationally independent of al-Qaida.

Solidarity with such causes, however, had played a central role in American Muslim identity formation well before 9/11, particularly among the relevant immigrant communities. By refusing to differentiate essentially local insurgencies from al-Qaida’s very specific and openly declared global campaign against Americans, the Bush administration suddenly considered the long-term advocacy of these causes as prima facie evidence of support for al-Qaida. But silence in these circumstances, even if it was the best strategy in the context of a very weak hand, was insufficient to protect American Muslim institutions or the community from charges of sympathy for terrorism. And once any kind of political violence became indelibly associated with al-Qaida, it was not long before Islamic doctrines justifying armed resistance (e.g., jihad¯ or acceptance of the idea of the caliphate) became synonymous with adherence to al-Qaida’s ideology.

American policymakers, who refused to acknowledge any political reasons for terrorism, developed in large part a theological response: adherence to “bad” theology came to serve as a proxy for sympathy with al-Qaida. The quest was on to find “moderate” Muslims who could serve as the public allies in its “war on terror.” In such an atmosphere, American Muslims were subjected to a virtual inquisition, their words and actions placed under continual scrutiny, to determine whether they held any questionable beliefs. If so, they were subject to exclusion from public life. In the worst cases, sting operations were launched against individuals in the hope that they might be induced to commit a manufactured crime. A community faced with what amounts to a systematic inquisition of its beliefs, doctrines, and practices is obviously in no position to defend itself. Indeed, one of the most vicious and insidious charges that the American right has leveled is that Muslims systematically engage in deceit and intentionally conceal their true beliefs when they discuss Islam with non-Muslims as part of a diabolical plot to subvert American institutions. One of the most destructive consequences of the right’s hysterical anti-Muslim campaign has been to undermine the trust of broad swathes of the American public in the community’s ability to serve as honest representatives of Muslim beliefs. As a result, American Muslims have been effectively silenced and excluded from public discussion of their own faith, not to mention important public issues regarding the future of the “war on terror,” the country’s relationship with the Muslim world, and the future of peace in the Middle East.

In such circumstances, the obligation to defend Muslims’ status as equal citizens in the American political community has necessarily fallen on the shoulders of non-Muslim individuals and civil society institutions. Institutions like the ACLU, the Brennan Center for Justice, and the Center for American Progress have played important roles in publicly defending Muslims’ civil rights. Some prominent journalists such as Glenn Greenwald of Salon.com have also courageously defended them against the ever-expanding impact of the “war on terrorism” on the community. Others, like Andrea Elliott of the New York Times, have done a masterful job of normalizing the lived American Muslim experience and tracing the rise of the so-called “anti-Shari¯ ‘a” movement. Yet, I know of no public intellectuals who have defended Islam as a legitimate part of American public culture. Normally, each community is responsible for articulating its own views and explaining how its members relate to the values of American democracy. The poisonous anti-Islam atmosphere, however, has effectively made it impossible for Muslims to explain their beliefs or their politics in public fora. Professional right-wing anti-Muslim propagandists, however, have stepped into the breach, effectively dominating the public discussion of Islam and Muslims. Effective resistance requires the Muslim community to cultivate its relationships with fair-minded non-Muslims and to educate them on the history of certain controversial concepts within Islamic theology and law, as well as their significance in the religious lives of modern Muslims.

Published in partnership with the British Council.