Journey of the Jihadist: Inside Muslim Militancy 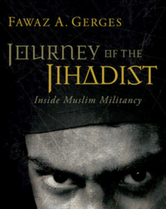 Journey of the Jihadist: Inside Muslim Militancy

In September 2005, Gerges, an academic turned news commentator, published a rare and thoughtful piece of scholarship, The Far Enemy, that sought to map the different views within militant Islam’s explosive underworld. Gerges argued nimbly, drawing upon numerous primary sources and firsthand interviews. After traveling across the Middle East and meeting with former jihadists, he learned that Islamic militants often disagreed on critical issues (including whether to attack the United States) and that their movement was far more variegated than Washington’s official portrayal suggests.

Published less than a year later, this new volume reads like a quicky follow-up. It covers similar ground, draws upon similar sources and is considerably more limited in its scholarly aspirations—although not, perhaps, in its commercial ones. Yet the follow-up may be the better book. Gerges has distilled his ideas to their core and done away with some of The Far Enemy’s repetitions. The book’s structure is also improved. It’s now built around a series of profiles that give focus to each chapter and shed light on how key personalities within the jihadist vanguard see the world. Gerges even devotes time to his own upbringing in war-torn Lebanon, and although the veers into his personal story are not always relevant, they are fascinating in their own right, adding both intimacy and depth to this valuable book. (May) Copyright © Reed Business Information, a division of Reed Elsevier Inc. All rights reserved.