#JeSuisAhmed: A Crucial Message That Everyone Should Hear

#JeSuisAhmed: A Crucial Message That Everyone Should Hear 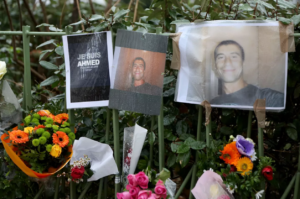 After the Charlie Hebdo massacre in Paris, the phrase “Je Suis Charlie” — “I am Charlie” — became the unofficial slogan of solidarity with the shooting victims. #JeSuisCharlie trended on Twitter, and people held up signs featuring the phrase at rallies all over the world.

Je Suis Charlie’s message is an important one in the wake of this horrifying crime. But now a new hashtag campaign, #JeSuisAhmed, has arisen to augment it. Its message of tolerance deserves — perhaps needs — to be heard as well.

#JeSuisAhmed honors Ahmed Merabet, the French police officer who was murdered outside the Charlie Hebdo offices by the same gunmen who went on to murder the magazine’s staffers. Merabet, in addition to being a police officer, is believed to have been part of France’s large Muslim community.

Twitter users have rallied to the hashtag to argue that Merabet, like the murdered journalists, should be honored as a defender of free speech — particularly because he died trying to protect a publication that had mocked and derided his own religion:

#JeSuisAhmed does not dispute the sentiment of Je Suis Charlie. Rather, it adds to it, by calling attention to the importance of tolerance as well as solidarity. That is important  in its own right, but it’s also an elegant response to those who might respond to the attack with broad hostility towards Islam, or suspicion of Muslims as a group.

Many people have pointed out that the actions of a few Muslims aren’t representative of the entire religion. But those reminders can feel like an abstraction in the context of an emotional debate over a terrorist attack. #JeSuisAhmed sends that message far more powerfully, by pointing out that the same logic could be used to conclude that all Muslims are heroic police officers.

The hashtag was also a reminder that the victims of Islamist terrorists are primarily Muslim:

Other users tweeted #JeSuisAhmed to point out the injustice of focusing on the attackers’ Muslim faith, while failing to mention Merabet’s.

In a Facebook post entitled “Je Suis Dalia,” Dalia Mogahed, the Director of Research at the Institute for Social Policy and Understanding, further extended the message of #JeSuisAhmed, using it to highlight the prejudice inherent in the demand that Muslims like her denounce or reject the Charlie Hebdo murders.

Mogahed’s post layers a new, individualistic message of tolerance onto the communal “Je Suis” rallying cry: a reminder that Muslims are individuals, and that the actions of murderous extremists should not be attributed to others who happen to share her faith.

The post hit a nerve, garnering more than 1500 likes and 600 shares within a day. In an email, Mogahed noted that others were sharing the same words under their own names.

Its popularity is understandable, because Mogahed’s post is, at its most basic level, a rejection of bigotry and prejudice. As Max Fisher wrote yesterday, blaming an entire group for the actions of a few individuals is “the very definition of bigotry.” Worse, that same logic perpetuates extremist violence itself, both from Islamist extremists and from others. “It is also, by the way, the very same logic that leads French non-Muslims, outraged by the Charlie Hebdo murders, to attack French mosques in hateful and misguided retaliation.”

Mogahed’s post serves as a polite but meaningful request that such bigotry end — and an implicit reminder that it can leave innocent people in danger.

Update: A number of outlets, including The Telegraph and The Guardian, have reported that Merabet was Muslim. The Telegraph reports that Merabet’s family plans to bury him in a Muslim cemetery, and that a friend of Mr. Merabet referred to him as a Muslim. However, other outlets, including the New York Times, say that his religion is unconfirmed. Social media users citing his name have widely presumed that he was Muslim.

This article was originally published on Vox and can be read here.

ISPU scholars are provided a space on our site to display a selection of op-eds. These were not necessarily commissioned by ISPU, nor is their presence on the site equal to an endorsement of the content. The opinions expressed are that of the author and do not necessarily reflect the views of ISPU.