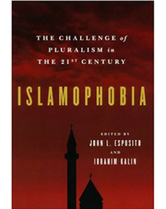 Islamophobia: The Challenge of Pluralism in the 21st Century

Islamophobia has been on the rise since September 11, as seen in countless cases of discrimination, racism, hate speeches, physical attacks, and anti-Muslim campaigns. The 2006 Danish cartoon crisis and the controversy surrounding Pope Benedict XVI’s Regensburg speech have underscored the urgency of such issues as image-making, multiculturalism, freedom of expression, respect for religious symbols, and interfaith relations. The 1997 Runnymede Report defines Islamophobia as “dread, hatred, and hostility towards Islam and Muslims perpetuated by a series of closed views that imply and attribute negative and derogatory stereotypes and beliefs to Muslims.” Violating the basic principles of human rights civil liberties, and religious freedom, Islamophobic acts take many different forms. In some cases, mosques, Islamic centers, and Muslim properties are attacked and desecrated. In the workplace, schools, and housing, it takes the form of suspicion, staring, hazing, mockery, rejection, stigmatizing and outright discrimination. In public places, it occurs as indirect discrimination, hate speech, and denial of access to goods and services.

This collection of essays takes a multidisciplinary approach to Islamophobia, bringing together the expertise and experience of Muslim, American, and European scholars. Analysis is combined with policy recommendations. Contributors discuss and evaluate good practices already in place and offer new methods for dealing with discrimination, hatred, and racism.