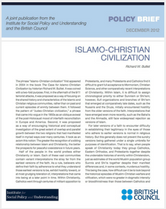 The phrase “Islamo-Christian civilization” first appeared in 2004 in the book The Case for Islamo-Christian Civilization by historian Richard W. Bulliet. It was coined with a two-fold purpose. First, in the aftermath of the 9/11 terrorist attacks, it was proposed as a way of focusing on the shared history and characteristics of the Islamic and Christian religious communities, rather than on past and current episodes of enmity between them. It followed the pattern of “Judeo-Christian civilization,” a phrase that came into vogue in the 1950s as an oblique avowal of the post-Holocaust mood of interfaith reconciliation in Europe and America. Second, it was proposed as a way of encouraging historical and conceptual investigation of the great extent of overlap and parallel growth between the two religions that had manifested itself in myriad ways over many centuries. It took as an axiom this notion: The greater the recognition of a sibling relationship between Islam and Christianity, the better the prospects for peaceful coexistence in future years.

The term “Islamo-Christian” conveys the vast degree of overlap between the two faiths, a degree of overlap that is significantly greater than the overlap suggested by the commonplace term “Judeo-Christian.” Use of this term encourages a comparison between Islam and Christianity that can yield valuable insights into each religion’s history and institutional structure. What follows outlines some of the lessons that can be learned by exploring the common characteristics of Islamo-Christian civilization.