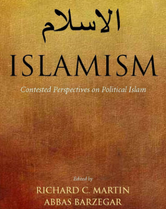 As America struggles to understand Islam and Muslims on the world stage, one concept in particular dominates public discourse: Islamism. References to Islamism and Islamists abound in the media, in think tanks, and in the general study of Islam, but opinions vary on the differences of degree and kind among those labeledIslamists. This book debates what exactly is said when we use this contentious term in discussing Muslim religion, tradition, and social conflict.

Two lead essays offer differing viewpoints: Donald K. Emmerson argues that Islamism is a useful term for a range of Muslim reform movements—very few of which advocate violence—while Daniel M. Varisco counters that the public specter of violence and terrorism by Islamists too often infects the public perceptions of Islam more generally. Twelve commentaries, written by Muslim and non-Muslim intellectuals, enrich the debate with differing insights and perspectives.