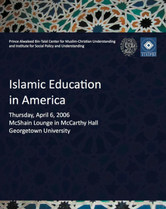 In recent years, the state of Islamic education in the United States has come under heavy scrutiny, assuaged by fears that US mosques produce radical young Muslims. The growth in the number of Islamic schools and institutions across the country, as well as the size of the Muslim-American population, deserves more attention.

The Islamic Education Conference was held on April 6, 2006 and hosted by Georgetown University’s Prince Al Waleed Bin-Talal Center for Muslim-Christian Understanding and the Institute for Social Policy and Understanding. The conference attracted approximately 125 Muslim educators, parents, and university students for a day of sharing information through presentations, discussions, and research. Panels were presented by scholars, teachers, and principals from varying fields and backgrounds. Each had varying perspectives on topics, but nearly all presenters opened their speeches by expressing the need for more research on Islamic education in the United States.