Islamic Divorce in North America: A Shari’a Path in a Secular Society 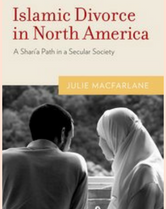 Islamic Divorce in North America: A Shari’a Path in a Secular Society

Policy-makers and the public are increasingly attentive to the role of shari’a in the everyday lives of Western Muslims, with negative associations and public fears growing among their non-Muslim neighbors in the United States and Canada. The most common way North American Muslims relate to shari’a is in their observance of Muslim marriage and divorce rituals; recourse to traditional Islamic marriage and, to a lesser extent, divorce is widespread. Julie Macfarlane has conducted hundreds of interviews with Muslim couples, as well as with religious and community leaders and family conflict professionals. Her book describes how Muslim marriage and divorce processes are used in North America, and what they mean to those who embrace them as a part of their religious and cultural identity. The picture that emerges is of an idiosyncratic private ordering system that reflects a wide range of attitudes towards contemporary family values and changes in gender roles. Some women describe pervasive assumptions about restrictions on their role in the family system, as well as pressure to accept these values and to stay married. Others of both genders describe the gradual modernization of Islamic family traditions – and the subsequent emergence of a Western shari’a–but a continuing commitment to the rituals of Muslim marriage and divorce in their private lives. Readers will be challenged to consider how the secular state should respond in order to find a balance between state commitment to universal norms and formal equality, and the protection of religious freedom expressed in private religious and cultural practices.