Islam Under Siege: Living Dangerously in a Post-Honor World 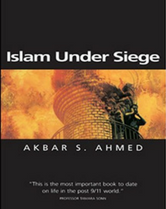 Islam Under Siege: Living Dangerously in a Post-Honor World

In this groundbreaking book, Akbar Ahmed, one of the world’s leading authorities on Islam, who has worked in the Muslim world but lives in the West, explains what is going wrong in his society by referring to Islamic history and beliefs. Employing theological and anthropological perspectives, he attempts to answer the questions that people in the West are asking about Islam: “Why do they hate us?” “Is Islam compatible with democracy?” “Does Islam subjugate women?” “Does the Quran preach violence?” These important questions are of relevance to Muslims and to non-Muslims alike. Islam Under Siege points out the need for, and provides the route to, the dialogue of civilizations. September 11, 2001, underlined the role of Islam in our time. In its demographic spread, its political span, and its religious commitment, Islam will be an increasingly forceful presence on the world stage in the twenty-first century. While some scholars predict that there will be a clash of civilizations, others see a need for a dialogue of civilizations. This book will help students, scholars of politics, sociology, international relations, and cultural studies, and reporters as well as a more general audience interested in some of the most important issues of our time.