Islam Is a Foreign Country 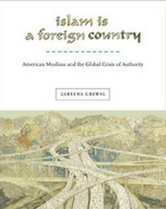 Islam Is a Foreign Country: American Muslims and the Global Crisis of Authority

In Islam Is a Foreign Country, Zareena Grewal explores some of the most pressing debates about and among American Muslims: what does it mean to be Muslim and American? Who has the authority to speak for Islam and to lead the stunningly diverse population of American Muslims? Do their ties to the larger Muslim world undermine their efforts to make Islam an American religion?

Offering rich insights into these questions and more, Grewal follows the journeys of American Muslim youth who travel in global, underground Islamic networks. Devoutly religious and often politically disaffected, these young men and women are in search of a home for themselves and their tradition. Through their stories, Grewal captures the multiple directions of the global flows of people, practices, and ideas that connect U.S. mosques to the Muslim world. By examining the tension between American Muslims’ ambivalence toward the American mainstream and their desire to enter it, Grewal puts contemporary debates about Islam in the context of a long history of American racial and religious exclusions. Probing the competing obligations of American Muslims to the nation and to the umma (the global community of Muslim believers), Islam is a Foreign Country investigates the meaning of American citizenship and the place of Islam in a global age.