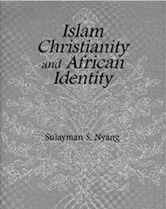 An in-depth examination of the influence of Christianity and Islam on traditional African society and values, and a thorough analysis of contemporary inherited three different traditions: the native African, the Arab-Islamic, and the Euro- Western Christian. Professor Nyang argues that traditional Africans shared a community of values which defined their attitudes toward life, self, history, and community. He believes that the penetration of Islam has had certain positive and negative consequences for the African peoples.