Introduction to Islam in the 21st Century 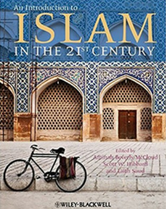 Introduction to Islam in the 21st Century

“An Introduction to Islam in the 21st Century” engages readers in an investigation of Islam that examines its lived reality, its global presence and its varied beliefs and practices. It is consciously global in perspective, and seeks to capture the diversity of Islam as it manifests in different regions and countries in the 21st century. It will also examine the different interpretations and debates that characterize Islam, both yesterday and today. The overarching theme of the text will be the contrast that exists between the commonly accepted images associated with Islam and its lived reality. While Islam is often thought of as a static and monolithic tradition, the reality is quite the opposite. Like other worldviews, it is fluid, dynamic, and characterized by enormous diversity. By examining trends in different countries and regions – Asia, Africa, Middle East and Europe – the book will give a more accurate depiction of Islam as a living religion. It will also explore the transatlantic and trans-Pacific character of Muslim responses to globalizing trends, and, particularly, to see what has changed, if anything, in both the understanding and the articulation of Islam in the post- 9/11 discourse. Addressing topics such as the maltreatment of women, the phenomenon of suicide bombers, anti-western sentiments and other key issues, “An Introduction to Islam” is an ideal text for courses which focus on the political, social and lived reality of Islam today.