Institutional Failure in the Response to Hurricane Katrina 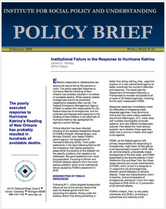 Institutional Failure in the Response to Hurricane Katrina

Effective responses to catastrophes can reduce the loss of life by fifty percent or more. The poorly executed response to Hurricane Katrina’s flooding of New Orleans has probably resulted in hundreds of avoidable deaths. While weather related emergencies cannot be prevented, catastrophic disasters often can be. The Federal Emergency Management Agency (FEMA) is tasked with responsibility for the federal response to emergencies, and the confused and disorganized response to the flooding of New Orleans in the aftermath of Hurricane Katrina has spotlighted the agency’s current failings.

Critical attention has been directed primarily at the apparent leadership failures of FEMA’s Director, Michael Brown, and Michael Chertoff, who heads FEMA’s parent agency, the Department of Homeland Security (DHS). Their public statements in the days following Katrina left the impression that neither seemed to grasp either the severity of the disaster nor the specific problems that needed to be addressed. But good leadership can never be guaranteed. Focusing on Brown and Chertoff distracts attention from the more serious problem, which is the institutional failure caused by FEMA’s placement in DHS.